Wild in the City’s founder Beth Collier reflects on the barriers to enjoying nature faced by children living in inner cities, in this article originally published in the Institute for Outdoor Learning’s Horizons magazine, Winter 2013, issue 63. 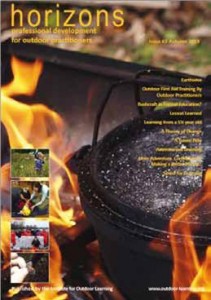 Earlier this year, as I waited for children to gather for a nature awareness session that I was running in Ruskin Park, south London, I asked a six year old what she had been doing in the Easter holidays, she replied ‘watching telly,’ she meant it literally – all day, everyday. Such viewing habits are not always by choice. Sadly children are cultured to entertain themselves with television by parents fearing for their safety on the streets, not being able to afford organised activities, or because of the emotional stress of their circumstances not having the energy to think creatively about playing with their children.

A recent report from Public Health Englandi stated that children’s health was suffering from sedentary lifestyles, with those spending excessive time watching screens developing higher levels of emotional distress, anxiety and depression. More than 70% of young people in the UK take less that one hour’s physical activity each day. This follows research from Play Englandii that children who did want to play outside faced hostility from their local communities. A rock and a hard place for children today?

Cities can become a prison for children from low income families, particularly those without access to a garden (most) and live in tower blocks (many), they are cut off from the street, let alone natural spaces. Many urban children are unaware of how it feels to be in nature and its calming and rejuvenating effects – because they have never been. This lack of awareness is itself a symptom of nature deficit which is often normalised; in mindsets nature and the outdoors come to be considered undesirable and pointless, having no place in their lives. We need to look passed this outer expression and try and meet these young people’s needs, acknowledging that the impact of nature deficit is stifling in a very real sense. Recent research using EEG’s to measure emotional experiencesiii has shown that being in man made urban environments triggers activity in areas of the brain associated with fear and stress, whereas being in natural settings triggers regions associated with stability, love and empathy.

From the content of age inappropriate tv programmes, violent games and online pornography, young children are bombarded with aggressive, stressful, adrenaline producing stimuli, in addition to living in stress inducing environments. This leaves many children constantly in fight or flight mode, in states of fear, anxiety and stress. Over time its exhausting and likely to have consequences on their well being into adulthood. In a violent world play is all the more important. Children living in such circumstances most need the calming and nourishing effect of green spaces, yet have the least access.

I was lucky enough to grow up in the countryside on a small holding, where natural environments were considered to be the norm; captivating, bountiful and fun. For a long time I viewed cities as dirty, limiting, synthetic and artificial; somewhere to work but not to live. I’m now long settled in the city but never cease to be amazed at how some urban children view the countryside and nature as “dirty,” “boring,” irrelevant and foreign; something to be avoided. In my growing up it was instinctive to rush excitedly out into nature for play, climbing trees, making dens, utilising rocks, sticks, flowers and mud into play, complaining when it was time to come inside.

Amongst some of the children I’ve worked with in London I’ve seen children stand motionless when ‘confronted’ with natural settings, unsure of what they are ‘supposed’ to do. Or complaining about being in the woods, “this is boring,” “when can we go back to the bus?.” This attitude changes, in miraculous ways, but it can take time as with any relationship, to get to know nature, understand and trust it.

Children who have never been socialised to know how to enjoy natural settings and regard it as an amenity, may view it as hostile. Parks are places where attacks might take place. Streets are named and signposted, there are people around who you could ask for directions. The idea of a large expanse of wood can be intimidating, how will they know where there are, how will they find their way out, what/who will be in there, what if they get lost? Such a space may be seen as isolating and eerie.

Travel and freedom of movement is an issue for some children, in regard to financial cost and fears around physical safety. There are too many children in London who have not ventured beyond immediate streets due to so called postcode wars, in which young people ‘defend’ their patch and intimidate or attack those who stray in from outside. This can develop anxiety about travelling to or being in unfamiliar areas. For families on benefits the cost of a bus or train ticket to get to green areas within a city can be out of reach. The prohibitive cost of train travel out of the city is effectively a large fence blocking off the countryside, that says ‘keep out, affluent people only’ and reinforces the sense of the city as a prison – too expensive to leave.

Image and poverty are also barriers for many children. A big issue amongst children from low income families is getting clothes dirty. A high status is placed on looking presentable in areas where poverty makes this a challenge. Children may be severely told off for ‘ruining’ their clothes and the priority to ‘look good’ means children are often sent for a day in the woods in inappropriate clothing, despite suggestions of what would be suitable. I’ve worked with several girls who have turned up for a day in the woods all in white with sparkly trims, one boy wrapped plastic bags over his white trainers to protect them from the mud. This isn’t about the children being superficial, parents want children to look good and avoid getting dirty so that people don’t think that they are poor and also because parents can’t afford to replace clothes or buy items specially for outdoor activities and trips to the launderette are expensive. In these communities the prevailing cultural attitude is that dirty clothes equals poverty. These children are caught between a materialistic message, itself evoked to cover a sense of shame or inadequacy about poverty and any desire to engage with nature. A disadvantage that many children from middle class homes don’t encounter, where the perceived cultural attitude maybe that dirty clothes equals productivity and having fun.

It would be too easy, yet wrong, to blame children for this lifestyle. It is the generations before them that have cultured and conditioned their expectations and parameters. We should ask ourselves what we have been doing, or not doing that has led to this shift. Lifestyles have developed which don’t incorporate nature and these are framing children’s experiences. Fears about paedophiles and street play, busy lifestyles that don’t leave time – or prioritise play with children, lax boundaries about screen viewing time because them watching TV suits us to get ‘5 minutes peace’ and adults own disconnection all lead into less time spent outdoors.

After a day in Sydenham Hill Woods an adult supporting the session said he felt embarrassed that he’d lived locally in south London all his life but hadn’t known that the woods were there. He’d driven past the entrance many times but it had never occurred to him what lay beyond. One of the best ways to help connect children back to nature is to help reconnect their parents, elders and the wider community, so that they can guide children back by normalising play outdoors.

In my volunteering and working experience in nature based activities in London, I’m yet to meet another black staff member among organisations hosting events. However, often at least 50% of the children attending the activities are black. There is a significant pool of black support workers who attend with children who could be trained to run nature based activities and increase outdoor engagement with children they already have relationships with and for whom race may become an additional barrier in accessing something that they are unfamiliar with. Wild in the City! hopes to do more work in the future training mentors, youth workers, support workers and counsellors in nature awareness and outdoor play skills.

As I re-read this article I’m concerned that it gives a negative view of the inner city context and doesn’t reflect the wealth of enthusiasm and creativity of inner city children, but remind myself the focus here is on barriers – in the hope that we can think about how these issues can be addressed in our work to further increase access.

Parks and woods offer an abundance of ‘free’ activities in urban areas. At Wild in the City! we hope to inspire people of all backgrounds by showing parents, children and communities things they can do for free outdoors and thereby open up new areas of play and relaxation for children and adults.